Sorry about the delay in reporting on the AGM. Problem is that the website is a one man band and the band has other tunes to play.

First my apologies for the the notice which said it would last from noon to 4pm! That did nothing to encourage hesitant persons of a delicate disposition.

Thank you to those who attended and I hope you found it informative. We will endeavour to cut the formalities to an absolute minimum in future. You will be delighted to hear that your committee was re-elected by a proposal from the floor with the exception of Linda who happily has been replaced by Stephanie Fitzpatrick. My sincere thanks to both of them. Linda has promised to make herself available as requested.

Eugene Murray and Charles Byrne were both in attendance and made useful contributions, answering questions etc.

Eugene also gave us a very good overview of the Superannuation Scheme which was very well received.

Eugene talked about the Actuarial report and the actuarial allowance for a 2.25% increase in 2017.  National Wage Agreements (NWA) had guided pension increases from 2000 to 2008. When the NWAs stopped, so also did our pension increases in 2008. He acknowledged that salaries in RTE had been severely cut and only recently been restored. However he did say that if there are any increases in salaries there  should be some follow on from us – he said he’s keeping a close eye on this.

He also mentioned that around 250 former civil servants transferred  to RTE – they were promised, (by the Minister, in the Oireachtas at the setting up of RTE) the retention of the same rights as current retired civil servants. Eugene also mentioned that since 2017 that RTE wrote to the Trustees telling them that they were stopping the annual €4 million payment into the fund  – this was on the back of an RTE pensions paid between age 60 and 65 arising from retirement packages 2009 – 2012.  RTE maintained that for them to continue paying into the fund would create a finance burden on themselves (RTE).  But in effect, the burden of the early retirement package is now transferred to the Superannuation Scheme.

He was also concerned that RTE advertised in the European Journal to put out a tender for an Actuary  on how to minimise risk on RTE’s financial scheme. The rules of the scheme were written in 1960, RTE are going through the process of reviewing the scheme. Eugene wants to ensure that the Trustees are making sure that there is no change of balance of power.

The value of the current fund €997.9m, of which 42% are invested in stocks and shares. Government bonds are reliable but yield little or no returns. There are currently 1,569 people on pensions.  He pointed out how equities can drop very easily depending on world economies. So there is a risk/reward for investing in equities.

He emphasised how we must always ensure that RTE or the State step into the breach if the fund ever fails to meet the Funding Standard – this is why it’s important that we maintain a good legal fund.

He was happy to report that now has access to all documents which he had requested to see & that there was a proper code of governance in place.

There was much discussion on CPI and whether the cost living has increased since 2008. Some people are feeing the pinch in the pensions with certain increases like heating, petrol, etc. However, the Contributory Old Age pension has increased by 16% since 2008.

My own Chairman’s address went roughly as follows.

In the year since we last met, I must first record with considerable sadness the death of Michael O’Connell.

Michael was a highly motivated and effective committee member. He had been delegated to come up with a recommendation for the most suitable legal firm to work on our behalf and we have acted on his advice. Our sincere condolences to Michael’s wife and family. He is missed.

Regrettably Linda Sherlock has had to resign just recently for family reasons. We will miss her a lot but she has promised to remain in contact.

It has been a busy year. On the basic housekeeping level we had to move our account from the RTE Credit Union to a bank. This became necessary as there are limits imposed by the central bank on the amount of money that a credit union can hold in any one account. Our normal account and our legal fund have been transferred to AIB Bank. Incidentally this involved a lot more hassle than you would believe. Moving an Association account is much more difficult than a private bank account and took quite some time. All payments require two signatures.

Phil did a lot of work preparing a new GDPR Policy. It is now on our website. Incidentally the incredibly restrictive Data Protection regulations means that we cannot obtain email details for members from RTE. It makes communication by letter post an extremely tedious and expensive alternative.

We now have our own web site. www.rtersa.ie it’s a basic website to provide information to our members. I would like to emphasise that this is not a competitor for the excellent work that Charles Byrne does. Please go and have a look at it and do let us know what you think and what you would like added to it. I emphasise again that we do not want to duplicate anything on Charles website. For the present I have to run the website myself so I have been on a sharp learning curve on how to use WordPress. I would very much welcome any assistance from anyone who has any knowledge in this area. We also have our own email address which you can find on the website.

Clearly the number one issue of concern to everyone is the lack of increase in pensions.

It is 2008 since we had the last increase. As you know the RTE Superannuation Actuary recommended a 2.25% increase over a year ago. RTE requested less than this from the Department of Communication and they in turn have passed it on to the Department of Finance and they in their turn have passed it on the the National Treasury Management Agency. This is a highly technical financial strategy called passing the parcel designed to allow highly paid officials to avoid making decisions.

It is of little comfort to point out that we are not alone in this regard. All the semi-state companies such as the ESB, BnaM, Coillte, Bord Gais etc are in the same boat. For this reason we have taken the initiative to approach all of them and to form a united Semi-State RSA which I chair. This in turn brought with it the the necessity to get involved in extensive lobbying of politicians and others and in this regard I must pay particular tribute to Mairead whose extensive contacts have proved extremely useful. We have met among others, Neil Richmond FG Senator and Brexit spokesperson, Kieran Mulvey, Jack O’Connor, Ged Nash, Timmy Dooley, Peadar Toibin, Dara Calleary, Michael McGrath & Barry Cowan. As a Semi-state RSA Group we were invited to present our case to the Joint Oireachtas Committee on new Pension legislation and it was regarded as an outstanding presentation. We have recently met the Parliamentary Labour Party and just yesterday we were invited to make our case to Brendan Howlin in Dail Eireann.

So what is the point in meeting these people – what are we trying to achieve? One basic fact became clear as a result of all our discussions. Pensioners have no voice in official Ireland. Also bear in mind what Jack O’Connor and Kieran Mulvey told us. “Always remember that 50% of the country have no pensions and many pensions are fixed for life.”

We have pointed out to all the politicians that pensioners require equity of treatment in having our voice heard.

I should mention that The ESB RSA had two protest marches recently. Over 500 retired ESB staff protested outside the ESB Offices and subsequently outside Dail Eireann. A number of your Committee members attended in solidarity. It would be an ambition of the Semi State Group Committee to organise a similar protest representing all the affected groups. However I regret to say that it can be very difficult to muster sufficient enthusiasm on the part of all concerned to muster sufficient numbers to do justice to the thousands of people who are affected.

Closer to home, over the years a lot of confusion and misunderstanding and a lot of anger has built up particularly over index linking of pension. I have put a lot of effort into gaining an understanding of the underlying issues. I must say I was starting from a very low base and what I have to tell you it’s not going to please you.

A number of issues were identified and consolidated into six questions which we put to Mathesons last November. They are a legal firm with particular skills in the area of pension law. This I won’t go into the full details of the entire issue here, partly to spare your time and partly because we need to consider our position for the future.

Matheson’s have made it clear that RTE has no role to play in awarding pension increases. This power lies exclusively with the Minister of Finance.

Looking further back, the following table sets out the total pension increases awarded between 2000 and 2008. This shows that RTE paid 16 NWA increases over this period and a special increase of 5% in 2002. 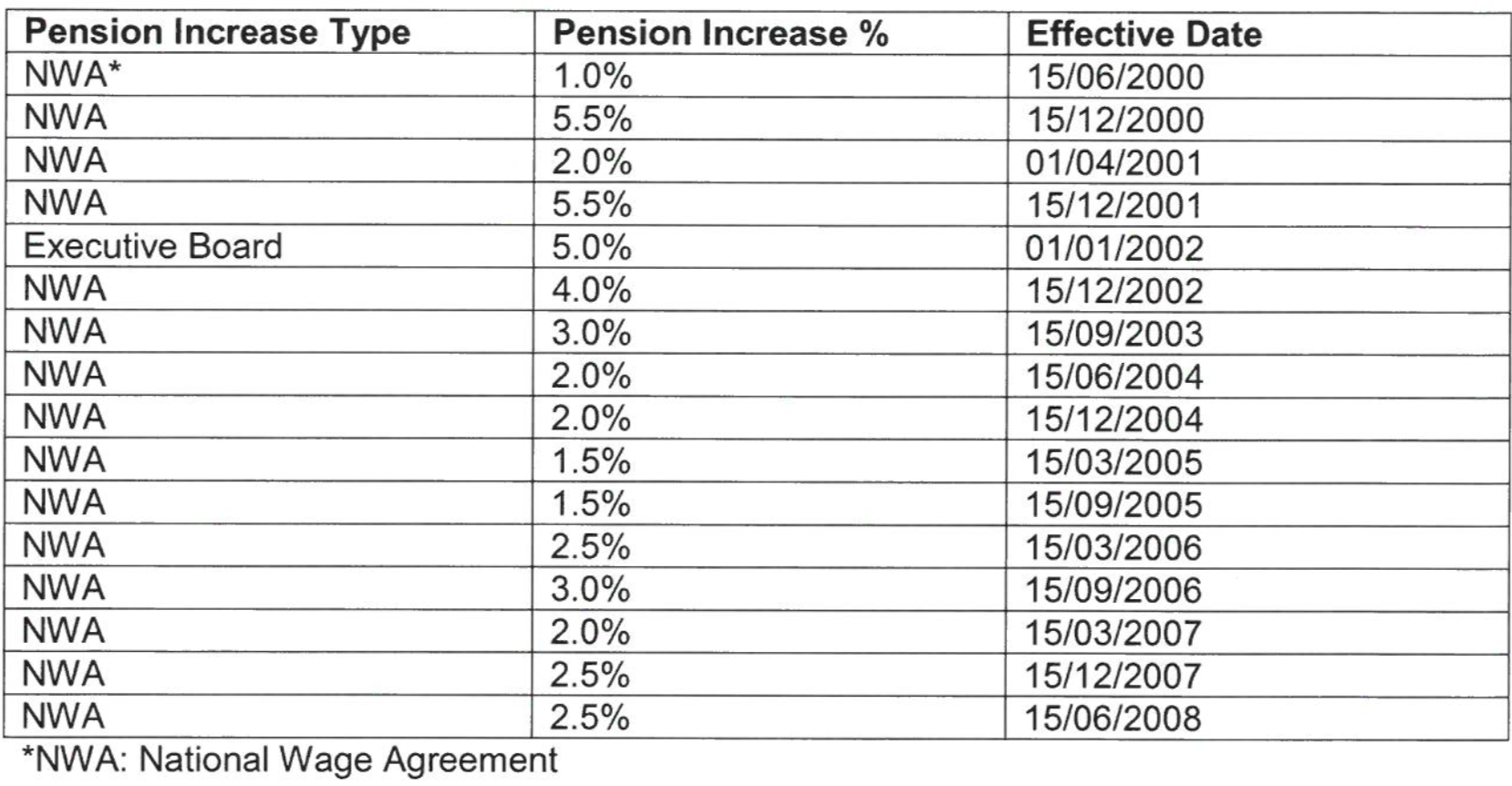 From June 2000 to June 2008 the Cost of living Index increased by 35.9% and the pension increases over this period more than reflect this.

It is clear that the RTE Superannuation Scheme has consistently awarded increases in line with National Wage Agreements over this period. In future, our main priority should be to ensure that this practice is sustained. In that regard, we have issued a well researched, evidence based, submission to RTE and the relevant Government Ministers seeking an immediate increase of 2.25%. Our priority should be to achieve pension increases in line with public sector pay over and above increases associated with “pay restoration”.

After 2008, staff salaries were severely cut and have only recently been restored to 2008 levels. I understand that some thought was given to cutting pensions at this time but happily did not proceed.

(Note that since 2008 there were pay reductions in Public Service pay and, more recently, these have been restored.)

I would be remiss if I did not emphasise that the RTE SS is among the best in the country. It still has its head above water which is not a characteristic of many others.

Speaking personally I would rather we mended our fences with the RTESS and endeavoured to collaborate with them in all our interests. Having looked over the fence, in a manner of speaking, at many of our sister organisations we have a lot to be grateful for.

Let me also record on your behalf, my thanks in particular to Brian and to Carole for their careful work during the year.