I am writing to you in my capacity as Chairperson of the RTE Retired Staff Association. We represent the 1500+ members of the RTE Defined Benefit Superannuation Scheme.

We only became aware recently that the scheme sponsor (RTE) has submitted an application to you (as the governing Minister under the 1960 Broadcasting Act – as amended) requesting a change in the Scheme Regulations ( regulation 20) to allow RTE to transfer the financial burden of the administrative costs from RTE to the scheme itself.

These costs currently run at approximately €500,000 per annum. RTÉ also acts as the Registered Administrator (under the pension Act 1990 – as amended) of the scheme. We have also become aware that there are plans to outsource the administration. This would increase the total cost of administration to €1 million per annum. We have been informed that the total cost to the scheme, over the longer term, would be in excess of €20 million.

This would be equivalent to a repeat of the pension levy which resulted in a reduction of pensions by 2.25%

Our position on this proposal is quite straightforward. If the Government approves this change in regulation it must include a “backstop” which ensures that it does not impact on the fund’s ability to pay increases in pension in line with public service pensions.

In other words the regulation change would require that RTE receives permission from the Minister for Finance each year to charge the administration fee to the fund. Permission would only be granted each year if the fund can afford and pays the pension increases linked to public service pensions of approximately 2% per annum – as provided for by the scheme actuary. If the scheme is deemed unable to provide this cost of living increase then RTE should not be able to offload the administration charge to the scheme.

In February 2020, the Government , arising from a decision by the Minister for Finance, refused an increase in the RTE pension of just 1%. The fund could well afford this increase, as the Actuary has demonstrated a surplus after allowing for an annual “cost of living” increase of 2% each year for the remainder of the scheme’s 50 years existence.

The apparent rationale for the refusal was Government’s concern that RTE would have difficulty affording to support the scheme covenant to meet the “balance of cost” of any deficit that may arise in the future. The cost of a 1% increase would be €400,000 per annum. The cost of the proposed change in regulation will be €500,000 per annum rising to €1m. per annum when the scheme administration is outsourced. The total cost to the scheme over time would be in excess of €20m.

Firstly, we would like to bring to your attention to the hardship imposed on RTE pensioners by the lack of any increase in pensions in the last 12 years. RTE pensioners were not permitted to pay a full PRSI stamp as a condition of their employment and therefore have no entitlement to the State Old Age Pension which has increased by over 16% in the same period. The RTE pension is the only source of income for our members. 20% of RTE pensioners are on pensions of less than the annual old age pension of €13,144 per annum. However with pay restoration in the public service now completed – the 2% pay increase in the public service pay next October will result in an automatic increase in Public Service Pensions of the same amount. We fully expect that RTE pensioners will receive this increase as has been the norm since the establishment of the fund 60 years ago.

RTE Pensioners have always had access to index linking with Public Service Pensions which in turn are linked to increases in public service salaries. 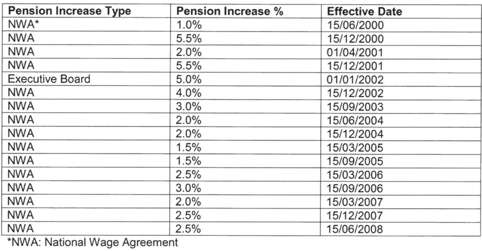 The Public Service Stability Agreement 2018 – 2020 provided for pay restoration of 5% to public service salaries and pensions which was completed in January 2020. The next increase of 2% in October 2020 will be a real increase which should also be due to RTE pensioners – and the scheme Actuary has provided for this increase in the scheme while still maintaining an actuarial surplus.

Secondly, It is not appropriate that every time RTE faces a financial crisis that they would impose very significant additional costs on the RTE Pension Scheme.

A number of our members have informed me that in the early 2000’s RTE introduced a series of highly incentivised early retirement programmes to reduce its own cost base. They provided enhanced benefits to people availing of the schemes that we have been informed added over €20m. to the liabilities of the scheme.

All of the pensioners availing of the early retirement schemes had access to pensions and lump sums at age 60 (instead of the previous “Normal Retirement Age” of 65). We estimate from the figures above that over 500 scheme members drew down pensions at age 60 at a cost of over €50m additional liabilities to the scheme. It also resulted in rapidly reducing employer contributions from RTE.

RTE’s contribution to the defined benefit pension scheme has declined immensely since the year 2000. Because the Pension Scheme has been closed to new members for over 30 years, in a few years all members will be retired and there will be no remaining contributing members. The remaining 170 active members are all very close to retirement. Within a short few years RTE and the active members will be contributing nothing to the RTE scheme which has annual outgoings of €40m.

Thirdly, there is a liability on the Minister for Finance to protect the RTE Pension scheme and its ability to pay cost of living increases to pensioners.

RTE’s assets were considerably reduced after the Minister approved the sale of the lands in Donnybrook. The scheme is governed by the Minister of Finance, who controls;

Any proposed increases in pensions – including inflation adjustments

Any changes to the regulations

The rates of contributions by the employer/employees (8% and 6.5% respectively)

Any measures to address a surplus or a deficit

Fourthly, RTE’s finances should not have priority over maintaining the real value of pensions for 1600 former staff who gave 40 years’ service to Public Service Broadcasting. The administration costs are the only significant contribution RTE makes to the scheme.

The Employer – RTE controls the scheme to the extent that it;

The scheme members have no power to suggest changes in the regulations. RTE made no contact with our association regarding this proposed rule change. We were informed by the scheme Trustees who have acknowledged RTE’s entitlement to seek a change in the regulations – without expressing a view one way or the other.

Finally, we understand that any proposed changes to the RTE regulations must be laid before the houses of the Oireachtas. As an Association we will lobby all parties to ensure that any change to regulation 20 will be accompanied by a “backstop” to ensure that each year RTE must receive Ministerial approval to charge administration costs to the scheme. This approval will not be forthcoming in the event that the scheme is unable to meet cost of living pension increases.

On a personal note I would make the following observation. At this time of unparalleled world crisis, there is a heightened awareness throughout society of the importance of our national institutions and the role they play in securing the present and the future. Not the least of these is our national broadcaster RTE. The people I represent have, in the main, spent a lifetime helping to forge this world class organisation now doing an outstanding job of reporting, educating and sustaining the morale of Irish society and all those Irish abroad. Rarely in the history of the country has a trustworthy National Radio and Television Broadcaster been more important in uniting society in the common good. How sad a commentary it is that the people who have spent their lives working for the state broadcaster have been rewarded in their older years by having no state pension and have had their own well affordable cost of living increases from their own savings blocked by Government. Little do most Irish people realise how poorly RTE staff have been treated in their old age. Many people throughout this state would regard it as shameful.